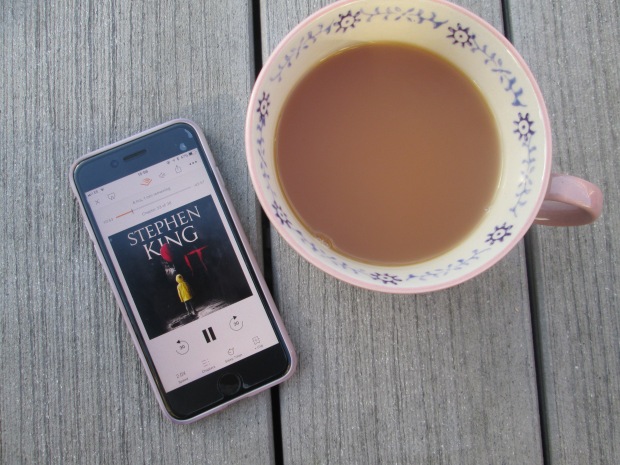 I’ve never been one for audiobooks. I embraced e-readers, but I guess I’m old fashioned in that I love having a physical book in my hands and the act of sitting down with a cup of tea and spending a few hours losing myself in a book. So what you’re about to read is half my review of Stephen King’s It, half a review of my first audiobook experience.

I really wanted to read It before the new film is released in the cinema, as I’m a massive lover of all things horror related, but at over 1,100 pages- the book is quite a big commitment and I have very little spare time since I work full time and have been spending the weekends working on my final coursework for my degree. Stephen King is also my favourite author, so what better way to dip my toe in than listen to one of his books? Spoiler alert though- I gave up and went to see the new film before I finished the book. I have seen the original two part series though, so I guess it’s not too much of a let down that I’ve seen the film before reading the book.

So I thought the best way to try and get through it as quickly as possible would be to give an audiobook a go… for the first time ever.

Now, I don’t even listen to podcasts. I’ve got lots of them downloaded on my phone just waiting for me to get into it, but I’m a massively visual person and I like looking at things whilst i’m listening to them, so I wasn’t really sure how I’d get on with an audiobook.

To start with, I was listening at 1.25x speed, but it was taking a very long time to get through, so I started listening to the book at 1.5x when I got half way through chapter four. Once I’d gotten used to that, I sped it up to 2x speed. It’s a little jarring at first, but it’s probably about on par with how fast I speak in real life, so it was quite easy to get used to the faster speeds. But then you can listen to it as a normal person would talk if you want- not everyone is as fast paced as I am.

I did like the fact I could listen to it whilst driving to and from work, which gave me more time to get through it, rather than like physical copies of books, where obviously I can’t read and drive at the same time. One bug bear I did have though, was that I felt that I wasn’t retaining as much detail as I would have had I been actually reading.

Whether my retention level was because of the audiobook, or because IT is really long and really detailed I can’t tell, but I started to lose names and felt my mind wandering a little so I lost pockets of information I probably could have used later on in the book when it kept referring back to characters that I couldn’t remember. 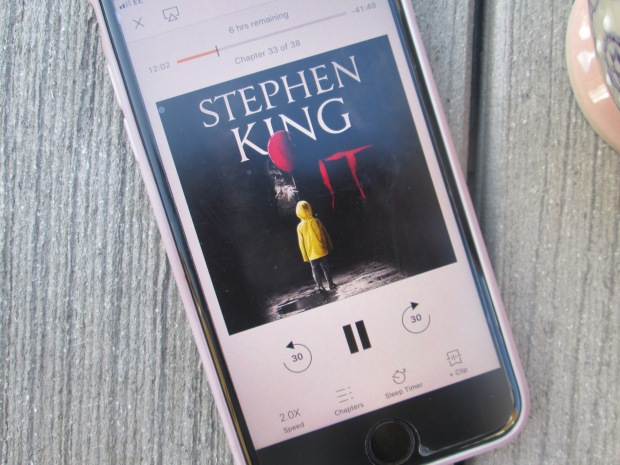 For a start, this book is long. Very long. I think it was around 46 hours long listening time, so you can imagine why it took me a fair while to get through.

Regardless of what I think about the book, I do think it should have been split into two, the way that the films have been. It would make it a lot more manageable. If you’re not familiar with the films, the novel was split into two, with the first film following The Losers Club when they were young, and the second when they come back to Derry 27 years later.

IT follows the story of a group of kids living in Derry, who affectionately call themselves The Losers Club- made up of Bill Denbrough, Ben Hanscom, Beverly Marsh, Richie Tozier, Eddie Kaspbrak, Stanley Uris and Mike Hanlon. They form a strong bond, which sees them take on some of their worst nightmares, as well as trying to avoid the beatings of the local bullies.

If you’re familiar with the story at all, it begins with Bill’s younger brother Georgie playing with a boat that Bill has made for him. With a bit of pathetic fallacy used straight away, he goes out to play with his boat in the pouring rain, which then falls down a drain. On trying to look into the drain for his boat, he’s greeted by a clown, who introduces himself as Pennywise. Needless to say, the encounter doesn’t go well and Georgie dies.

Georgie isn’t the only kid to go missing in Derry however, many other kids have also disappeared, no where to be found, with no one aware that Pennywise is to blame. The kids in The Losers Club all have their own experiences with Pennywise, and decide to band together to beat him- visiting the house on Neibolt Street and standing up to their biggest fears to stop Pennywise from killing any more children.

It takes them on a (very long) journey to stop Pennywise, but it’s one that’s never boring. The book isn’t split into the first time, and when they come back 27 years later, but rather is a chapter or so of one, and a chapter or two of another. It doesn’t make it hard to follow, because it’s always obvious which storyline you’re following, but I think it would have been just as easy to split the book into two.

On THAT scene. If you’re familiar with IT at all, you’ll probably know about the controversial scene. There’s a portion of the book close to the end where in order to bring everyone together, Beverly sleeps with each of the members of the Losers Gang. Stephen King has said he didn’t mean for it to be crude, but it’s kind of difficult to read, considering the kids are meant to be 11-years-old. I basically zoned out when this scene was being read to me- so much worse than reading in your head by the way- so the details are a bit hazy. It’s meant to bring them together, and is a mark of them leaving their childhood, but I definitely think he could have expressed this in a different way than essentially a gang bang. Sorry.

Everyone that knows me, or has probably ever read one of my posts talking about some of the books I love, will know that I love Stephen King’s books. So it’s unsurprising then that I really enjoyed IT. It’s definitely the longest book I’ve ever “read” hence the audiobook, but I would recommend it to anyone who is either a fan of Stephen King, or a fan of horror fiction. I’ve already downloaded and started new audiobooks, so for now I may not be a convert, but it’s something I’m trying to get on board with.

As for the film- I really enjoyed it. I’d seen the trailer and was really hopeful that it would be good, and it definitely delivered the right level of creepy. I would definitely recommend that as well!