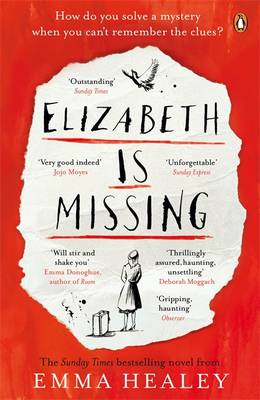 First Impressions before reading the book:

I knew literally nothing about it, except that it’s written from the perspective of an old person. That’s it. I pretty much went into this blind.

I felt like there wasn’t actually a lot going on in the book story wise, except from the fact that it follows the main character Maud, an 82 year old woman who has problems with her memory. There are constant flashbacks to her childhood, and her family life. There’s almost two storylines running at once, the present day, and her past. The present day storyline follows Maud’s decline in memory, and her attempts to find her friend Elizabeth, whom she believes is missing. The past, childhood storyline follows her life as her sister Sukey goes missing, and how her and her family dealt with the issue. Because it follows Maud’s memory loss, by the end of the book the two timelines get very confused, and the story merges. I obviously won’t spoil the end of the book, but it’s definitely not what I expected!

The story’s told from Maud’s perspective, an old lady with serious memory problems. There’s also frequent mentions of her sister Sukey and her husband Frank, their lodger Douglas, and her parents through flashbacks to her past. In present day however, other reoccurring characters are Helen; Maud’s daughter, and Elizabeth; Maud’s friend, as well as numerous other minor characters.

Would I recommend it?

I’m going to be honest, I found reading the demise of Maud’s memory made me feel almost anxious? It’s a real issue that many people face and I think it made me almost stressed reading the book, knowing that it could happen to me in the future. Despite my future fears, I thought it was a really interesting concept, and definitely not something I’ve ever read before. I always find reading books with an unreliable narrator exciting, and this is no different. I found myself really wanting to know what had happened to the characters in her past life, and I did try to guess the ending of the book (which I failed at). As to whether I would recommend it, i’ve already told my mum she should give it a go! I definitely enjoyed it.